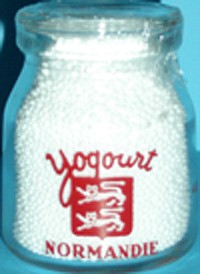 Towards 1950, Mr. Flipot, an immigrant from Normandie, in France, bought the dairy farm of the former St-Hubert Mayor, Arthur Sauvé 1916-1925. From 1954 to 1963, he made the " Normandie Yaourt " and he was selling it in St-Hubert, Longueuil, everywhere on the South Shore and in Montreal.

At that time, even if Yaourt was largely commercialized in Europe, it was not the same story in Quebec. We can say that Mr. Flipot was probably one of the first to initiate this excellent product in Quebec and to commercialize it. Since 1962, his son Jean-Louis, use the old barn of the farm as a veterinary clinic.